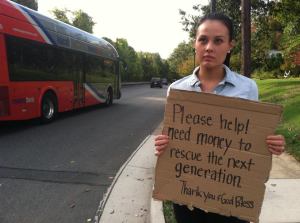 Three hundred and sixty Kickstarter campaign backers successfully funded the pilot for Our Show a Christian tween TV show being produced by The Newfangled Project, a production company in Arlington, Virginia.

The co-founders of The Newfangled Project, Kathryn Arnett (Creative Director) and Katharine McKenny (Executive Producer), launched the successful one-month fundraising campaign on September 16, 2012. Through intense, daily promotion, they succeeded in not only meeting their goal of $50,000, but exceeding it by over $10,000.

According to the show’s website, “OurShow is a show about tween friends who decide to write, produce and direct a sketch show from their garage. In between sketches, parodies, music videos and more, they go through the ups and downs of tween life and production. Their parents and families are a huge part of their lives, and we see their interactions on a daily basis.”

Stay tuned to NoVA Christian Film for further updates on the development of this project.